Public confidence in eVTOLs to increase says a new study

A new survey (1) amongst private equity and venture capital professionals revealed that 82% expect public confidence in the eVTOL sector to increase over the next three years with 18% expecting a dramatic increase. The survey was conducted by Horizon Aircraft, an innovative leader in eVTOL vehicles.

When asked for the reasons why they believe there is increasing public confidence, 80% cited the fact that there is a growing acceptance that the first eVTOL flights will have qualified pilots, and this is followed by 69% who said major developments around regulation of the sector.  Other factors include more high-profile media coverage of successes in the sector, more successful passenger and cargo VTOL trials, and a growing number of larger companies becoming involved in the sector. 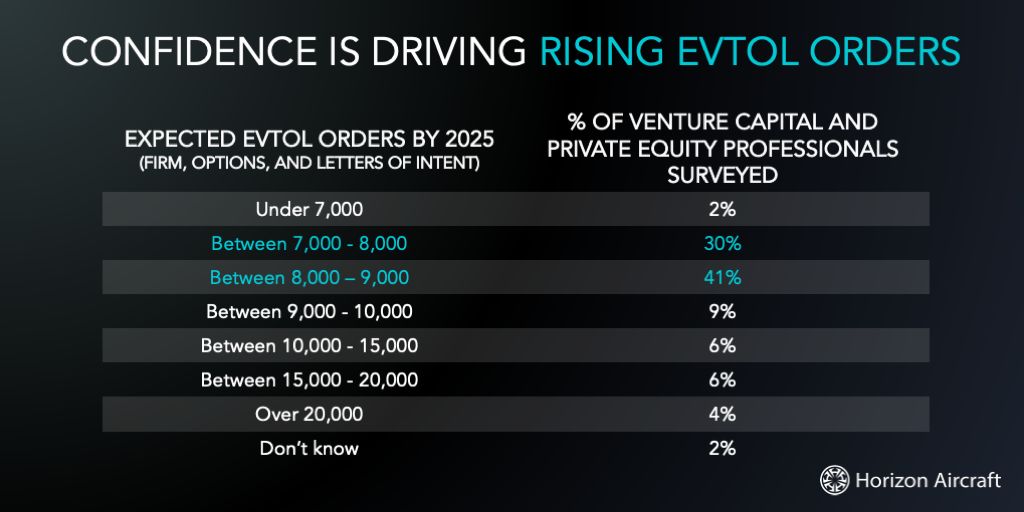 Brandon Robinson, CEO of Horizon Aircraft said, “As public confidence in the eVTOL market grows, professional investors expect the sector’s order book to grow and more investment to flow into the industry.

“Our research shows 63% of private equity and venture capital professionals expect there to be over 430,000 air taxis in operation by 2040, and 88% anticipate the sector will generate at least $30.7 billion by 2030. It is not surprising that our research shows 54% of professional investors expect over $30 billion will be invested in the market by 2030, compared to $7 billion in 2021.”

Horizon Aircraft, and its flagship Cavorite X5 design, has been attracting significant interest from within the industry having won several grants, a US Department of Defence advanced research and development contract award, and being ahead of its competitors with its large-scale prototype already flying.

Horizon Aircraft is currently running rigorous flight testing of its 50%-scale prototype while continuing to develop a detailed design of a full-scale aircraft.

Horizon’s innovative approach and technology allows its Cavorite X5 to fly 98% of its mission in a very low-drag configuration like a traditional aircraft. Flying most of the time as a normal aircraft is safer and will make the aircraft easier to certify than radical new eVTOL designs. The full-scale aircraft will also be powered by a hybrid electric system that can recharge the battery array in-flight while providing additional system redundancy. Comprehensive testing of this 50%-scale aircraft will reduce technical risk moving forward as Horizon continues development of its full-scale aircraft.

(1) Horizon Aircraft commissioned the market research company PureProfile to survey 100 senior private equity and venture capital professionals to capture their views on their eVTOL market. Respondents were based in the US, Canada, UK, Australia, New Zealand, China, Hong Kong, Germany, and the UAE. The survey was conducted online in November 2022.