The unprovoked invasion of Ukraine has led to significant changes in flight patterns. In a recent snapshot, EUROCONTROL explored what this meant for some countries in Eastern Europe. Below are some of the effects on long-haul flights to Asia. The graph shows the distances flown to link four European cities with their Asian counterparts, before and after the closure of Ukrainian airspace and the closure of Russian and Belarus airspace to some airlines. 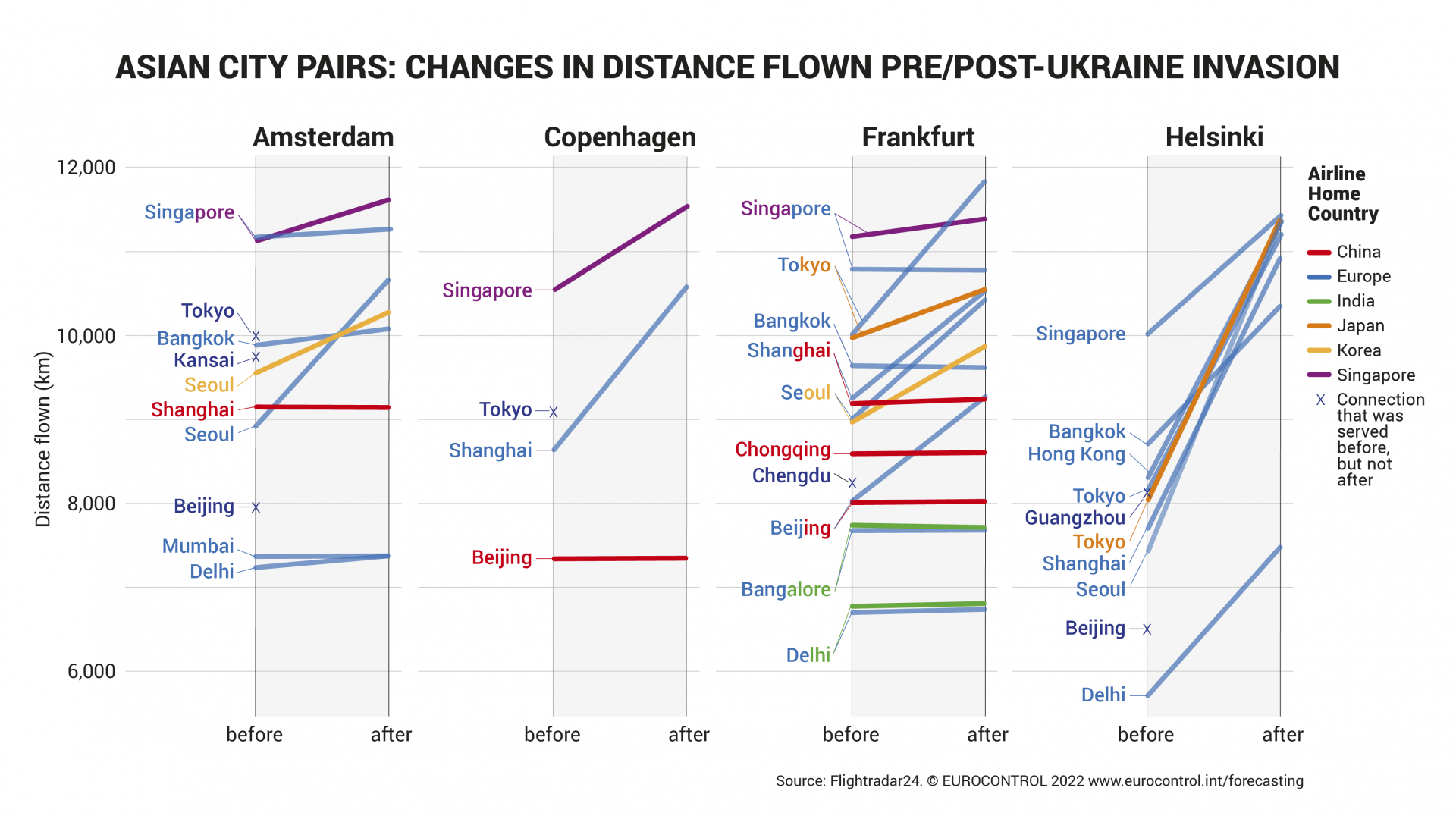 The extra flight-time led some airlines to cancel the connection, marked by an 'X' on the 'before' axis, for example Finnair has stopped flights from Helsinki to Beijing, and SAS has stopped flights from Copenhagen to Tokyo. This decision is driven by passenger and cargo demand, additional fuel costs, constraints from scheduling, staffing and airports (gates and curfews) and, in some cases, the capabilities of available aircraft, given the prevailing winds en route.

In many cases, if not cancelled, the frequency of the connection is reduced. This is not shown on the graph, which focuses instead on the distance flown. Out of the examples shown here, it's evident that connections from Helsinki are most affected, with additional distances between 1400km (Singapore) and nearly 4000km (Seoul). To put that in context, 1400km adds 1.25 hours to the flight, and 4000km adds 7 hours on a round trip between Helsinki and Seoul. Helsinki<>Seoul used to be about 8.5 hours but is now 12 hours, so another 7 hours on a round trip is nearly as much as the original one-way segment.

Further South, and further from the closed airspace, Copenhagen sees an additional distance around 1500km to Singapore and Shanghai. Beijing is served by a Chinese cargo operator, Air China Cargo, which is still able to fly Siberian routes, so there are no additional track miles.

Frankfurt is sufficiently far south that there is no additional flying to reach destinations in India and South-East Asia. For Lufthansa, Beijing is about 1200km further, but Air China (passenger and cargo) is barely affected.